How To Paddle Faster - The Speed Formula 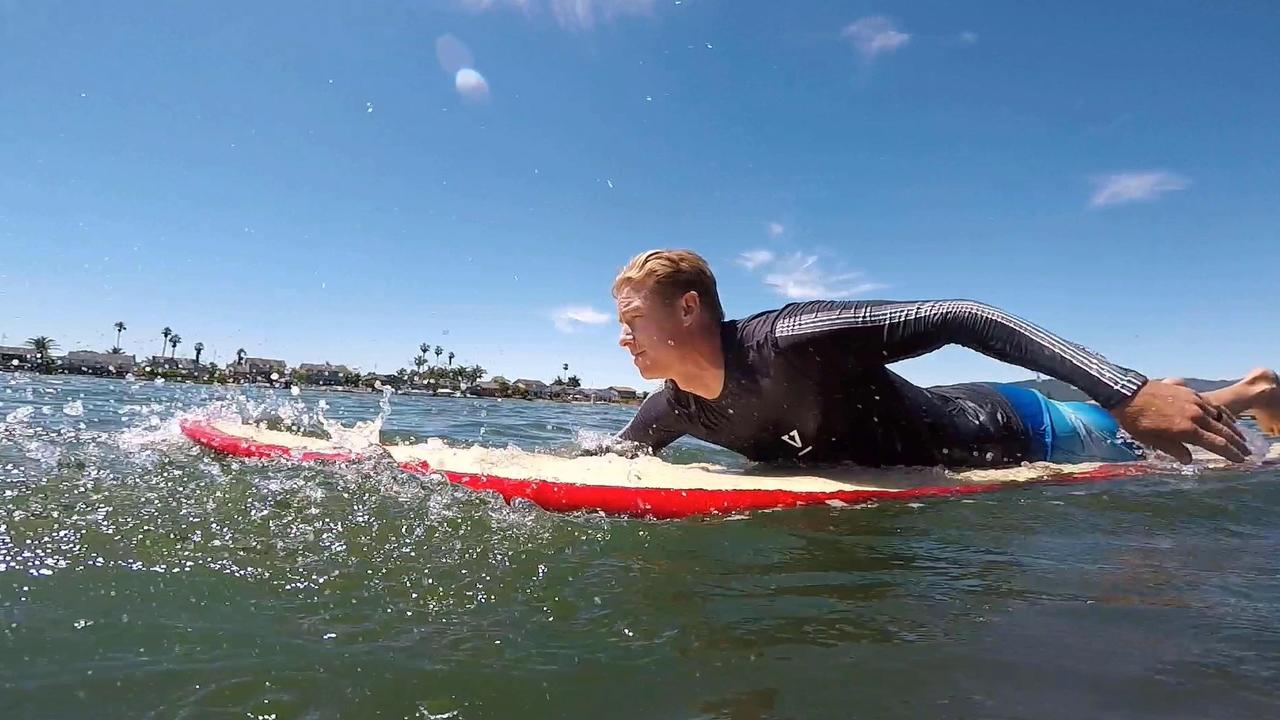 "Speed.  I am Speed" - Lightning McQueen

Only a parent would start with a quote from a kid's movie.  But I felt that in order to talk about how to paddle faster, we really need to first understand what speed is.

And I'm warning you now that since I am a math nerd with my mathematics background, I'm going to throw a bunch of formulas at you.  But in the end, you'll know where speed comes from and how to paddle faster.

What is paddling speed?  How do we paddle faster?

Speed is defined as covering a certain DISTANCE in a specific amount of TIME.  Or Distance divided by Time (distance/time).

For the speeds we paddle at, we typically will define speed as METERS PER SECOND (meters/second or m/s).

There are a variety of variables that impact this, including the paddling technique used, the design of the board used, the water conditions,  even salinity of the water, fitness level of the paddler, and others.  But if we break SPEED down even further, we gain some insight into a very efficient process to increase our speed in the water.

So I’m going to throw down some algebra for you, and I hope it doesn’t scare you away.  I promise to make it as simple as I can.

SPEED is a function of two variables.  In other words, if we multiply two things together, we get speed.

You’ve all heard of the first variable.  “PADDLE FASTER” someone will say.  “WINDMILL!!”  “AS FAST AS YOU CAN”.  This is the profound advice you hear from your buddy sitting on the outside when you’re caught inside, sucking in ocean foam and saltwater, going backward. 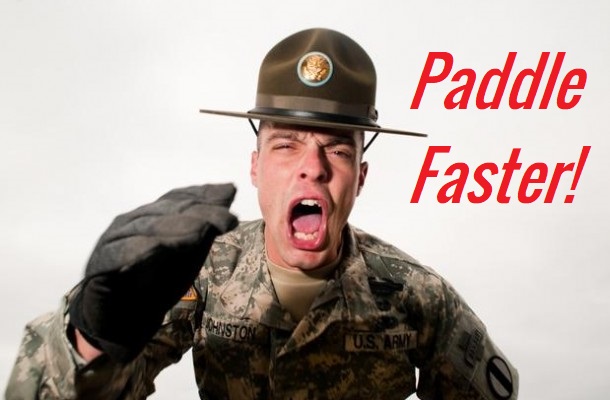 So all of those coaches, and friends, and strangers, who were yelling at you to “PADDLE FASTER”, or “MOVE YOUR ARMS FASTER”, were in essence, correct.  According to this formula at least.

For example, if you have a very high STROKE RATE, as your friends and the salty local keep telling you to do, BUT this other variable is very low, guess what?  You’re not going to be going very fast.  In fact, it’s probably worse because you’re using so much energy to move your arms as quick as you can, but you’re not getting anywhere!  Ever have that feeling?  At least your sessions are short when that happens cause you gas out pretty quickly.

Seems totally illogical, doesn’t it?  Let’s burn a ton of energy, but not go anywhere.

So what is this other variable then?

Some very simple algebra can help us figure this one out.

IF SPEED, or METERS PER SECOND is equal to STROKE RATE, or CYCLES PER SECOND, then this other variable has to eliminate “CYCLES” and include “METERS” because the left hand side has to equal the right hand side of the equation.  So we want METERS to be the numerator of this new variable so we’ll put that on top.

CYCLES needs to be eliminated so we’ll put that as the denominator, or on the bottom.  That way CYCLES cancels out when these two variables are multiplied together, and we’re left with METERS PER CYCLE.

Now it makes sense.  If you’re swinging your arms as fast as you can, but those strokes aren’t sending you very far, then you’re not going to go very fast (high stroke rate, low distance per stroke)

That means that DISTANCE PER STROKE describes how effective each stroke is.

STROKE RATE is how fast you’re turning over your arms, and DISTANCE PER STROKE is how effective those individual strokes are at propelling you in the forward direction.

This is incredibly important.  WOW!  What a way to think about it.

To move fast, and I mean really fast, is to have a HIGH STROKE RATE, a high number of CYCLES PER SECOND while at the same time having a high DISTANCE PER STROKE, a high METERS PER CYCLE.  Simple!  Right?  I mean the math makes perfect sense.

So why is it so hard to actually do this in real life?

This goes back to how STROKE RATE and DISTANCE PER STROKE affect each other.  We need to balance these two variables.  If we use high STROKE RATE combined with high DISTANCE PER STROKE, that would be ideal.  But at some point as the STROKE RATE increases, the DISTANCE PER STROKE is negatively affected, simply because stroke mechanics limit this.  The surfer doesn’t get the propulsion required to move a long distance per stroke because the arm is rushing through the cycle so quickly, the arm doesn’t get to the necessary places it needs to be in the underwater armstroke at the right time in order to provide effective propulsion. In addition, when the armstroke is rushed, a phenomenon called “slipping” is much more prevalent and “slipping” a sign that we are being inefficient with our energy and ineffective with our propulsion.  I go into more detail in the Surfing Paddling Academy Online course, but for now, all you need to know is that slipping is a bad thing.

How to we find that balance then?

How do we find the BEST STROKE RATE combined with the BEST DISTANCE PER STROKE?

This depends on your goal.

Do you want to go as fast as you possibly can?  Do you want to use as little energy as you can?  Would you like to split the difference and have good speed, but be efficient with your energy?  There are an infinite number of combinations on this spectrum.  But if we were to look at a typical surf session, and the activity within it, we might be able to direct our goals to an efficient use of our time and energy.

You may have seen me show this before in the Free Video Series you can sign up for at my website SurfingPaddling.com. 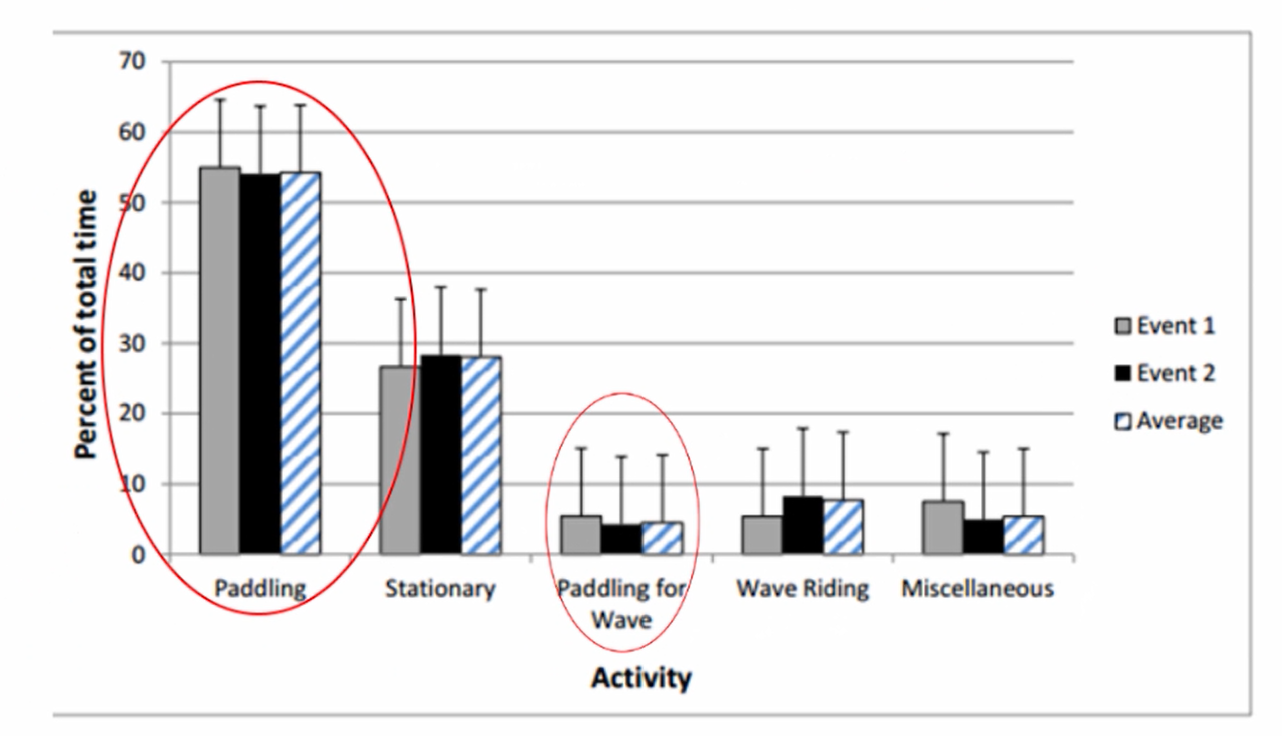 This is a study conducted at a contest that breaks down time spent by activity.  It shows paddling takes up more than 65% of the time, and over 85% of the active time, the time the surfers are moving.

Now keep in mind, this is conducted with competitive surfers, during a competitive heat, and it takes place at a point break.  So presumably, they would be riding longer and more frequently than many of us recreational surfers.  One could very reasonably argue that for recreational surfers, paddling takes us well over 95% of the active time in the water.

Given this, don’t you think our primary goal with paddling is to optimize energy use?  Since most of our paddling is our regular paddling stroke, and NOT the sprint, then we need to achieve a paddling stroke that moves us through the water effectively, but uses very little energy.  We want to develop a paddling technique that we can increase speed quickly if we need it AND makes sure that our efficiency of movement remains high.

Going back to our formula, let’s key in on what we need to work on first and foremost in order to lay a strong foundation for how to paddle faster.

Is this looking familiar yet from the Free Video Series you signed up for at SurfingPaddling.com?

THIS is the answer to HOW we achieve our three Level 1 goals of how to paddle with less energy, how to paddle faster, and how to prevent injury.

Remember the answer to this is to first REDUCE RESISTANCE and then, INCREASE PROPULSION.  In that order.

Here’s the extra cool thing.  Once you gain an understanding and practice around the techniques used to optimize a foundation of STROKE RATE and DISTANCE PER STROKE, you’ll be going FASTER with less effort already.  Then to go even faster, increase your STROKE RATE.  It’s so EASY at that point.

Since you will have learned at this point of making your stroke rate efficient and how to propel yourself effectively through better technique, then each stroke takes you further and you’ll know when the STROKE RATE gets too high that it negatively affects the DISTANCE PER STROKE, or in other words, the effectiveness of each stroke’s propulsion.  You’ll find that ultimate balance.

It’s so simple, isn’t it?  That’s how you paddle faster.  With less effort!  Without getting injured.  Simple paddling technique.

Thank you so much for making it to the end!  You did it!!  Wow, that was a long one.

If you liked it, please let me know.  And subscribe to this monthly newsletter if you haven't already done so to get more free training and news and updates.  Of course, if you haven't already taken the training, Sign Up for the Free Paddling Technique Training at to learn more about how you can catch more waves with less effort.

In the meantime, I’ll see you in the water.